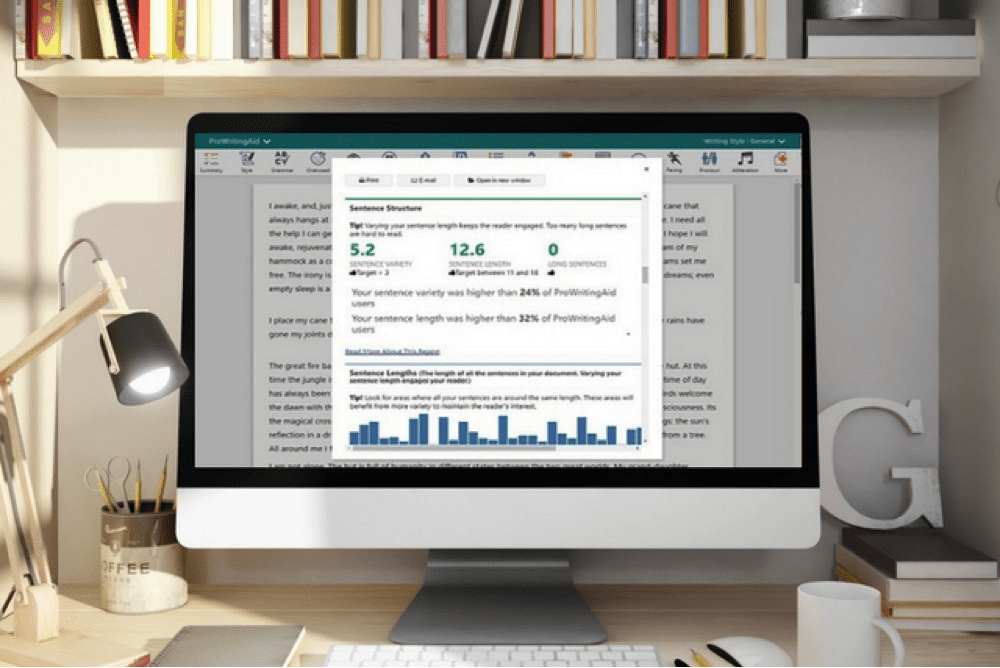 We are so happy today to have a guest post from Lisa Lepki, of ProWritingAid! ProWritingAid is a Day 3 sponsor of The Women in Publishing Summit. There’s a special offer for our readers, so be sure to read to the bottom to grab that deal!

When you type those amazing words, “The End,” it’s more of a psychological ending because there’s still so much more work to do. After you’ve put your manuscript aside for a while, you can come back to it with fresh eyes and start your self-edits.

Self-edits are both stylistic and technical improvements you need to make before you send the completed manuscript to your editor. The best way to show respect for your editor’s time is a rigorous review (and I know, I am one!). Let him or her focus on strengthening your narrative and character arcs by taking care of the straightforward fixes.

Here are the 7 most critical self-edits you shouldn’t ignore.

You want every word in a sentence to move your reader forward. Passive verbs put the subject after the verb, so readers don’t figure out to whom the action is happening until later in the sentence. Here’s an example of a sentence with passive verb.

Original: The mail was delivered bright and early that morning by Sabrina.

You don’t learn who delivered the mail until the end of the sentence. Let your reader know right up front who’s doing what.

Rewrite: Sabrina delivered the mail bright and early that morning.

Clear, succinct, and more active, don’t you think? But, of course, exceptions exist. Say you’re writing a mystery and someone shoots a gun, but you don’t want your readers to know who fired just yet. Use passive voice:

In the early hours on a dark winter night, five shots were fired.

Adverb use is subjective. What one writer sees as limited, another might find oppressive. The key to using adverbs is to make sure they’re not shoring up a weak verb. Let’s look at an example:

Original: George went hastily around the fire, waving a sparkler over his head.

I bet you can think of a stronger verb than “went” that doesn’t require an adverb to give it urgency. How about:

Rewrite: George charged around the fire, waving a sparkler over his head.

Not all adverbs need to go. Some work well in their specific context. Still, read through your manuscript, circling every adverb with a red pen, and ask yourself, “Can I use a stronger verb here?”

It’s easy to hide a verb when you’re in the flow and the words are flying across the screen. Nominalization is when you turn a verb into a noun and pair it with a weaker verb. Here’s a sentence with a hidden verb:

Original: After sleeping on it, Sarah made the decision to accept the new job.

Can you spot the hidden verb? Consider this rewrite:

Rewrite: After sleeping on it, Sarah decided to accept the new job.

Characters sometimes give an explanation instead of explaining something. Or the mayor might make an announcement rather than announcing the winner of a contest.

Reveal those verbs in all their glory!

Find a clearer—and shorter—way to phrase something. Always err on the side of brevity. A few examples of clunky wording sound better when rewritten.

Original: She is most certainly going to the dance on Saturday.

Rewrite: She will go to the dance on Saturday.

Original: Harriet didn’t have any pencils in her backpack when she got to school.

Rewrite: Harriet had no pencils in her backpack when she got to school.

Again, wording is subjective. If you think you can improve your wording, then by all means rewrite. But if it works, move on to the next edit.

There are some words and sentence constructions that are fine to use occasionally, but become problematic when they are overused. You need to keep your eyes peeled for these potential issues:

Words like “might” and “could” are indefinite in their meaning. “I could come over after work” feels uncertain and hesitant, whereas “I will come over after work” feels resolute. If your writing has too many of these wishy-washy words, it won’t feel persuasive. Try to limit your use of these indeterminate words to times when the specific context demands it, and replace them with definite words whenever possible.

2) Telling Rather Than Showing

Words like “knew,” “felt,” and “saw” tend to be indicative of telling rather than showing. Instead of saying David knew that Peter was lying, say: Peter avoided David’s eyes as he stammered “I don’t know where it is”. Likewise, don’t say Susan felt frightened when she heard the knock at the door; say: Susan’s heart leapt in her chest when she heard the knock at the door. If you use too many telling words, your writing will be less evocative. Read more about the “Show, don’t tell” rule here.

3) Depending on Intensifiers Instead of Finding Stronger Words

Sticky sentences have too many glue words, the 200+ most common words in the English language. Words like “in,” “of,” “to,” “that,” “the,” “some,” etc. are just the scaffolding for your sentence’s meaning. Too many glue words is an indicator that your sentence may be awkward or unclear (use an editing tool like ProWritingAid to highlight these). Let’s look at an example:

Original: The man on the motorcycle came to a stop at the intersection and looked both ways before crossing the road.

Of the 20 words in the above sentence, 70% of them are glue words. Consider the following rewrite:

Rewrite: The man stopped his motorcycle at the intersection, looked both ways, then crossed.

Down to 13 words, this rewrite is concise. It carries the same meaning with fewer glue words.

Vague words don’t tell readers much about your meaning. If you describe your main character as a pretty girl, “pretty” means different things to each person. Try to be more specific. For example:

Rewrite: Amelia’s gray eyes were arresting. Almond-shaped, they tilted up at the outside corners, and had impossibly thick, black lashes.

Abstract words are intangible and lack clarity. Their lack of concrete meaning leaves them open to interpretation. Here is an example:

Original: Her kindness meant the world to Michael.

Your reader will wonder just what kindness she performed for Michael.

Rewrite: She brought dinner over several nights in a row while his son was in the hospital. It meant the world to Michael.

The above tips are stylistic and technical edits that your basic spelling checker won’t find. If you want to cut your editing time in half, use an editing tool to check for these improvements and more. ProWritingAid is one editor that saves you time and energy by generating 26+ reports showing ways to polish your manuscript. It doesn’t make the changes for you; you decide what to change and what to leave.

Test a variety of online editing tools to decide which one offers the most robust and comprehensive edits. Then run your manuscript through before sending it off to your editor. Let her make your story the best it can be instead of wasting time correcting your technical gaffes and clunky wording.

Special Offer: Want to try using ProWritingAid to find all of these errors and more? It’s free to use and voucher code WPS2018 will get you 25% off ProWritingAid Premium, which allows you to use their integrations for MS Word, Google Docs, Scrivener, and more. Check it out!

ProWritingAid is a sponsor of the Women in Publishing Summit. Find out more about them during this incredible free online event.

Lisa Lepki is the Editor of the ProWritingAid blog. A word nerd, she loves the technical elements of writing almost as much as the writing itself. She is the co-author of The Novel-Writing Training Plan and 20 Editing Tips from Professional Writers. Her work can also be found on Writer’s Digest, bookbaby.com, The Write Life, and DIYAuthor. Contact her at lisa@prowritingaid.com