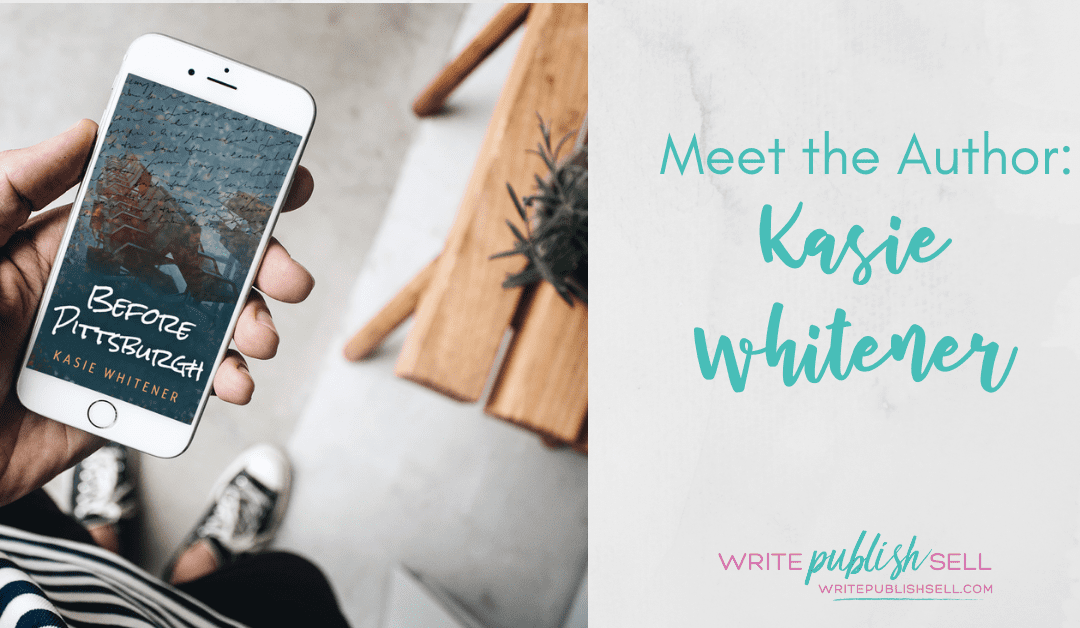 This week, we have two favorite authors that are releasing their books. This means two author spotlights! This time, we’re giving you a behind the scenes look at Before PIttsburgh, which is the second in a series by Kasie Whitener. We definitely recommend checking out After December, which is the book that started the series!

Please tell us a little about you:

I’m a GenXer and I mostly write stories that have a 90s nostalgia to them. My radio show is called Write On SC and we’ve been on the air for three years, 156 episodes. We also have a YouTube channel and podcast. I’ve been working on my fiction craft with some level of daily practice since 2012. Recently, I had one story picked up by The Showbear Family Circus (“For the Win”) and another win the Broad River Prize for Prose through The Jasper Project to be published in Fall Lines magazine (“The Shower”). I won the Fresh Voices in the Humanities recognition from the Governor of South Carolina and SC Humanities this summer for my work on the radio show, and as VP of Education and Events for SC Writers Association.

Please tell us a little about your book:

Before Pittsburgh is the second book in Brian’s head. It fills a three-year gap between the last two chapters of my debut novel, After December. While Before Pittsburgh can be a standalone, I think the two are richer when read together. Preferably within the same 48 hours (ha!). We begin Before Pittsburgh with a flashback to 1995 and Brian and Tony, best friends, attending a college party as high school seniors. We’re then plunged into the depths of Brian’s grief four years later. Through Barcelona, San Francisco, LA, Nashville, and Tucson, we journey with Brian to establish himself in a world without Tony. He tries to make amends, figure out what really matters to him, and piece together what it means to be an adult.

Why did you write the book?

I wrote Before Pittsburgh because readers of After December wanted to know what had happened between the Sunday Brian leaves Northern Virginia with everything in shambles and the 02/02/02 wedding date for Tabby and Joel in which he seems to have earned forgiveness from everyone, including Kacie. How did he get there? The 02/02/02 epilogue was meant to be final — just to let us know he’d recovered. But readers wanted to know how he’d managed to do it.

Who is this book for?

Before Pittsburgh is certainly for After December readers. I thought that target audience was women in their 40s who remember the turbulent relationships of their 20s. Who want to revisit the 90s and think about the boy they let get away because he hadn’t yet become a man. But I’ve found the book also resonated with men in their 40s who see Brian as a friend they had, a guy they knew, or even themselves. It’s a nostalgic book that I expect to resonate with other GenXers.

What is YOUR favorite part of the book?

My favorite part is returning to Pittsburgh for the wedding weekend and, specifically, the stolen moments between Brian and Kacie. I’m a romance novelist junkie and I crafted those scenes with everything I’ve learned about making two people intensely attracted to one another.

I was 12 when I wrote the first draft of the book that would become After December. So Brian and The Crew have been with me for a while. I wrote all through high school and college but didn’t really get serious about it until my late 30s. In 2012, we moved to Columbia, S.C. and I decided I’d been writing enough marketing copy, and academic stuff that I wanted to try to get back to the stories. I joined a writers group and have been steadily working on my craft ever since.

How is this book different from other books in your genre or niche?

A lot of commercial fiction focuses on present-day or recent memory. That necessarily requires the inclusion of such disruptive things as social media and cell phones. My work is almost entirely 90s and early 2000s, before we had the instant connection to one another we have now. A lot of fiction is told in chapters and I really avoid chapters. I tend to use cities, dates, and other ways of marking the passage of time and the movement from scene to scene in a novel. After December was five days. Before Pittsburgh is told in months and seasons, then cities, and finally one specific day narrated in time stamps: September 11th. I like to play with the structure of the novel to mirror the pace of the character’s arc.

What challenges did you face writing your book during a pandemic?

Screen and keyboard fatigue. I was teaching a full course load at U of SC and we were all online so I spent a lot of time in front of the computer. Being there to write and edit, too, was a challenge. But I had a lot of work I’d already done on Before Pittsburgh, sort of the leftovers of After December, things that needed to be said but hadn’t found their place in that first novel. That made this particular project the right one for pandemic. Also, Before Pittsburgh is largely about Brian’s isolation, confusion, and grief. All of those emotions were so pervasive during pandemic, and that made the writing more authentic.

Do you have any other books? Where can they be found?

After December is on Amazon and in a handful of local indie bookstores in S.C. The Full Moon in Neverland is a YA fantasy novel I’ve been writing this summer and it can be found on Wattpad. Redesign Work: Volume 1 is a nonfiction piece about remote work, co-authored with my editor Jodie Cain Smith. I also have two academic texts, Practical Entrepreneurism published by Great River Learning, and Strategic Management published by Kendall Hunt. For more fiction, look for “The Shower” in Fall Lines coming out this fall and visit online The Showbear Family Circus where you can see “For the Win.”

Where is the best place for readers to connect with you?

My website is kasiewhitener.com and I blog pretty regularly. I have an email list you can subscribe to from the website. I only send email once a month or so. I have an author page on Facebook, but the only social media I have on my phone is Instagram (KasieWhitener) and Twitter. I’m on Twitter every Tuesday at 6 p.m. for the #wschat and the radio show, Write On SC, airs every Saturday. We use Twitter (@WriteOnSC) and Facebook to interact with our audience for both of those.